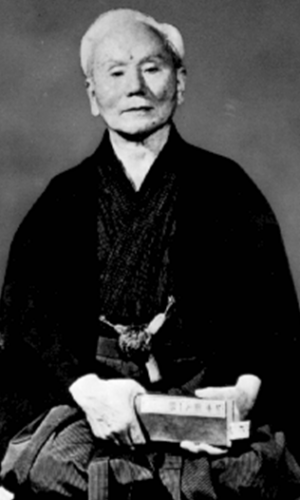 Modern day Shotokan karate was first demonstrated in Japan in 1922 by Master Gichin Funakoshi. However, the history of karate stretches further back than this to the Ryuku Islands off the coast of Japan, today known as Okinawa. In 1922 Gichin Funakoshi travelled to mainland Japan to give a demonstration of karate to the All Japan Athletic Exhibition in Tokyo.

Soon after this demonstration he was asked to give a demonstration at the Kodokan Judo Hall to Jigoro Kano (The founder of Judo) and his senior instructors. This demonstration was well received. This was the turning point and lead to the introduction of karate into Japan. Gichin Funakoshi was born in Shuri, Okinawa in the year of the Meiji Restoration around 1868 to ethnic Okinawan parents and originally had the family name Tominakoshi.

After entering primary school he became close friends with the son of Ankô Asato, a karate and kendo master who would soon become his first karate teacher. Stiff opposition of Funakoshi's family to the abolition of the Japanese "topknot" meant he would be ineligible to pursue his goal of attending medical school. Being trained in both classical Chinese and Japanese philosophies and teachings, Funakoshi became an assistant teacher in Okinawa. During this time, his relations with the Asato family grew and he began nightly travels to the Asato family residence to receive karate instruction from Ankô Asato. Funakoshi had trained in both of the popular styles of Okinawan karate of the time: Shôrei-ryû and Shôrin-ryû.

His own style was influenced by kendo distancing and timing. Shotokan is named after Funakoshi's pen name, Shoto, which means "pine waves" or "wind in the pines". In addition to being a karate master, Funakoshi was an avid poet and philosopher who would reportedly go for long walks in the forest where he would meditate and write his poetry. Kan means training hall, or house, thus Shotokan referred to the "house of Shoto". This name was coined by Funakoshi's students when they posted a sign above the entrance of the hall at which Funakoshi taught reading "Shoto kan". By the late 1910s, Funakoshi had many students, of which a few were deemed capable of passing on their master's teachings.

Continuing his effort to garner widespread interest in Okinawan karate, Funakoshi ventured to mainland Japan in 1922. The Creation of Shotokan Karate In 1936, Funakoshi built the first Shôtôkan dojo in Tokyo. He changed the name of karate to mean "empty hand" instead of "China hand" (as referred to in Okinawa); the two words sound the same in Japanese, but are written differently. It was his belief that using the term for "Chinese" would mislead people into thinking karate originated with Chinese boxing. Karate had borrowed many aspects from Chinese boxing which the original creators say as being positive, as they had done with other martial arts. In addition, Funakoshi argued in his autobiography that a philosophical evaluation of the use of "empty" seemed to fit as it implied a way which was not tethered to any other physical object. Funakoshi's take on the use of kata was reported to have caused some recoil in Okinawa, prompting Funakoshi to remain in Tokyo indefinitely.

His extended stay eventually led to the creation of the Japan Karate Association (JKA) in 1955 with Funakoshi as the chief instructor. Funakoshi was not supportive of all of the changes that the organization eventually made to his karate style. He remained in Tokyo until his death in 1957. After World War II, Funakoshi's surviving students formalized his teachings. Towards the latter half of his life, Master Funakoshi became extremely dissatisfied with the direction in which the system he had originally created had been developed. All elements of true karate style pressure point striking were slowly removed and emphasis on fighting and training with kata devolved to little more than endurance training, with little understanding of kata's meaning. Legacy Funakoshi published several books on karate including his autobiography, Karate-Do: My Way of Life.

His legacy, however, rests in a document containing his philosophies of karate training now referred to as the niju kun, or "twenty principles". These rules are the premise of training for all Shotokan karateka and are published in a work titled The Twenty Guiding Principles of Karate. Within this book, Funakoshi lays out 20 rules by which students of karate and urged to abide in an effort to "become better human beings" Funakoshi's Karate-Do Kyohan "The Master Text" remains his most detailed publication, containing sections on history, basics and kata and kumite. The famous Shotokan Tiger by Hoan adorns the hardback cover.

One of the world's most renowned and respected traditional karate masters alive is Kanazawa Soke, 10th Dan. Kanazawa Soke is the only karateka ever to have won the notorious 'All Japan Karate Championship' an incredible three times in a row, on one occasion winning the finals whilst nursing a broken wrist from an earlier event. Although he trained in Judo in his early years, Kanazawa took up karate whilst at University under the late headmaster of the Shotokan style Matsatoshi Nakayama (10th Dan). Kanazawa is also one of the few remaining karateka priviliged to have studied under Master Gichin Funakoshi, the famous Okinawin school teacher who brought karate to mainland Japan from Okinawa and founded the Shotokan style.Breaking away from the JKA (Japan Karate Association) in 1973, Kanazawa set up SKIF (Shotokan Karate International Federation).

SKIF is now the world's largest Shotokan association, having over 2 1/2 million members in over 100 countries. Hirokazu Kanazawa is a world renowned shotokan karate instructor. He is currently the Chief instructor and President of Shotokan Karate-do International Federation, an organization he himself founded after he left the Japan Karate Association (JKA). Kanazawa is one of the few masters to have achieved 10th Dan (the highest rank that can be awarded to a living Shotokan karateka Kanazawa won the very first theAll Japan karate Championshipof Kumite championship in 1957. He had registered in the kumite competition with a broken hand from a prior event, but not wanting to disappoint his mother who had traveled from far away to watch him compete, he fought anyway and won the title.

The following year, Kanazawa won the Kata title and shared the Kumite title with Takayuki Mikami in one of the most spectacular moments in Shotokan tournament history. Mikami and Kanazawa had been classmates and roommates for the entirety of their karate careers, but had never fought the previous year because Mikami was away teaching in the Philippines for two years. When they fought one another in the final round, very few techniques were thrown, they knew each other too well. They circled searching for openings until time was up. For that reason, it was decided that both instructors were All Japan Kumite Champions for 1958. History Although trained in judo in his early years, Kanazawa began training in karate whilst at Takushoku University under the late head instructor of the Shotokan Masatoshi Nakayama. Kanazawa is also one of the few remaining karateka privileged to have studied under Gichin Funakoshi, the famous Okinawan schoolteacher who brought karate to mainland Japan and founded the Shotokan style.
Kanazawa also was among the first to graduate from JKA's instructor training program (before JKA fragmented and Kanazawa went on to form his own organization. Some of his other famous classmates in the instructor training program include: Takayuki Mikami and Eiji Takaura.